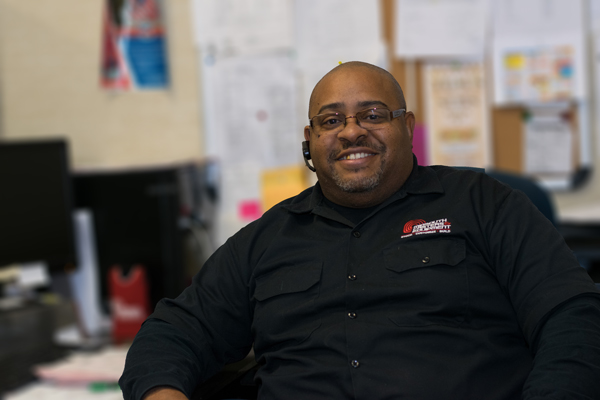 This month we want to introduce you to Shon Williams. Shon joined MidSouth Casters & Equipment in 1995 and has worked tirelessly to serve our customers ever since. You might have met him over the phone or in person, but either way, his smile is obvious.

Shon has been with MidSouth Casters & Equipment for almost 23 years. Up until August of 1995, Shon had been working for the local housing authority and became aware of an opening with MSC through a family member. Shon met with then owner Michael Moffatt and was hired that day. He started in the warehouse and quickly learned the warehouse operations of the business. As he rose to warehouse leader, he became a product expert and the face of MSC for many of our customers.

Shon says he loves his current role. Since 2014 Shon’s responsibilities have been expanded to include sales, technical support, invoicing and assisting with purchasing when needed. Over the past 22, years Shon has touched virtually every aspect of MSC and has learned every facet of the business. He enjoys talking to customers, which is obvious from the smile on his face if you have ever met him. In Shon’s words, one of the aspects he loves about his work is that he is given a job to do and then left alone to get it done.  He enjoys the ability to balance his work life and home life, and loves the fact that each day he is challenged and given the opportunity to rise to meet those challenges.

When asked if there have ever been any instances with customers that stick out in his mind, there is one story Shon loves to tell. One of the areas that we serve is the repair of wheel chairs. One summer afternoon, a customer literally drove up in his motorized wheelchair. He needed a new tire but was unable to get out of his wheelchair and requested that we fix it with him in it. Always wanting to find a way to say yes to the customer, Shon carefully cleared his wheel while the gentleman sat in his wheelchair, and replaced it. Once everything was taken care of, the gentleman drove back off, happy with his new wheel and MidSouth Casters & Equipment. Shon light heartedly describes that as the day we performed a NASCAR style pit stop on one of our customer’s wheelchairs.

Whenever you ask Shon to do something, his response is, “I will make it happen.” He has developed a loyal following among some of our customers so much so that some will wait for Shon if he is with another customer. He loves to tackle the challenging application or to try to figure out a way to make sure the customer leaves with the right solution. Shon loves a challenge. He believes in what he is doing and understands that the very work he does makes a difference in people’s lives by making their work easier, safer and more productive.

We all look forward to working with Shon for many years to come.