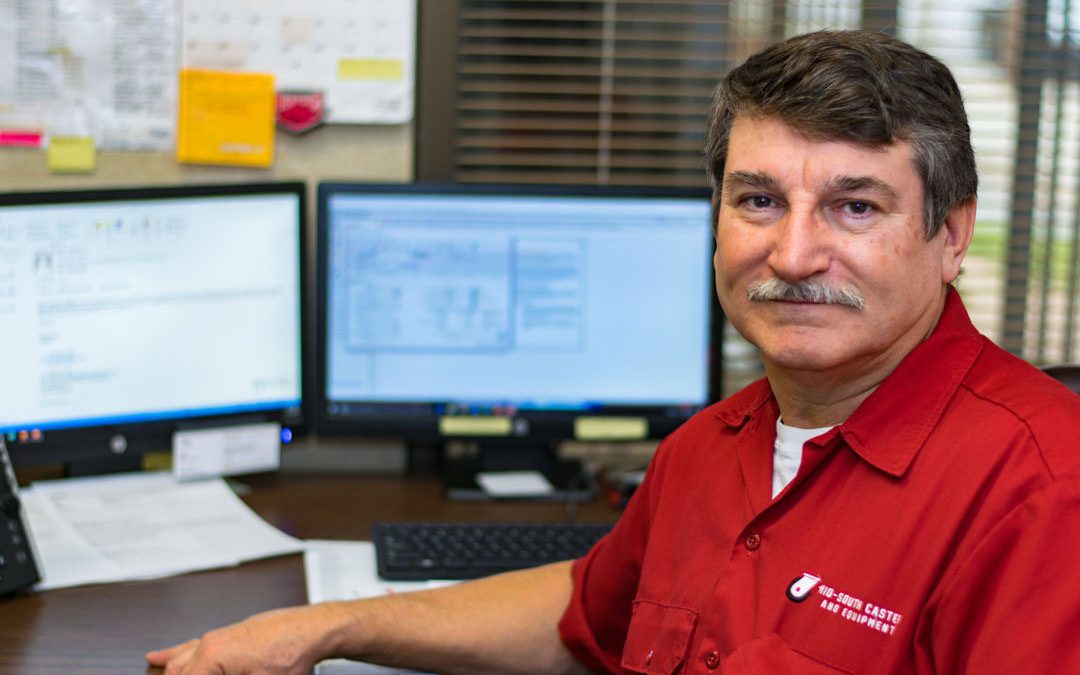 Periodically we want to highlight those here at MidSouth Casters & Equipment who work everyday to help make your businesses run smoothly. You may talk to them frequently, but not know their background and expertise in the industry. We have many dedicated employees here who have set high standards for themselves and their work. Bill Pankey is one of those whose personal philosophy is to ensure that you get what you want when you need it. His role here at MidSouth Casters & Equipment touches every area from technical support to purchasing to inside sales.

Bill began his career with Colson in the welding department where he quickly was promoted to be their team leader. In his 13 years at Colson, he did just about everything within that organization, from welding to production control to inside sales. By the time he left there, Bill had proven himself capable in almost every area of that business.

Over the years, Bill has witnessed many changes in the industry. One of the greatest changes Bill noted is the dominant reliance on imported products. He noted that when he first started, imports weren’t very common, but now very little is manufactured in the US.

Those who talk to Bill and know him know he has a great sense of humor and obviously enjoys his work. When asked, Bill noted that what he enjoys most about his work is, “working with people and having the knowledge to provide a product that addresses a customer’s needs, and when finished, they feel the service they received was in their best interest.” Bill also believes that his relationship with our suppliers is equally important, so they can trust his requirements. It is clear from the conversations I have had with Bill that customer service is a lost art with many industries. He, without hesitation, noted that the one thing the industry could improve on was customer service.

From Bill’s perspective, the future of the material handling industry is strong. He sees it as being strong from necessity. He perceives that “as long as quality and valuable knowledge are provided, you are only limited by the number of potential customers you are able to reach.”

It is clear Bill has enjoyed his career in the material handling industry. His philosophy is simple, “I have always felt that with a little education, a lot of dedication and conscientious hard work, life will lead you down a good road and I’m satisfied that happened for me.”